Network models have become a popular way to abstract complex systems and gain insights into relational patterns among observed variables in many areas of science. The majority of these applications focuses on analyzing the structure of the network. However, if the network is not directly observed (Alice and Bob are friends) but estimated from data (there is a relation between smoking and cancer), we can analyze - in addition to the network structure - the predictability of the nodes in the network. That is, we would like to know: how well can a given node in the network predicted by all remaining nodes in the network?

Predictability is interesting for several reasons:

We load the data which the authors made openly available:

The datasets contains complete responses to 17 PTSD symptoms of 344 individuals. The answer categories for the intensity of symptoms ranges from 1 ‘not at all’ to 5 ‘extremely’. The exact wording of all symptoms is in the paper of McNally and colleagues.

We estimate a Mixed Graphical Model (MGM), where we treat all variables as continuous-Gaussian variables. Hence we set the type of all variables to type = 'g' and the number of categories for each variable to 1, which is the default for continuous variables level = 1:

For more info on how to estimate Mixed Graphical Models using the mgm package see this previous post or the mgm paper.

After estimating the network model we are ready to compute the predictability for each node. Node wise predictability (or error) can be easily computed, because the graph is estimated by taking each node in turn and regressing all other nodes on it. As a measure for predictability we pick the propotion of explained variance, as it is straight forward to interpret: 0 means the node at hand is not explained at all by other nodes in the nentwork, 1 means perfect prediction. We centered all variables before estimation in order to remove any influence of the intercepts. For a detailed description of how to compute predictions and to choose predictability measures, have a look at this paper. In case there are additional variable types (e.g. categorical) in the network, we can choose an appropriate measure for these variables (e.g. % correct classification, for details see ?predict.mgm). 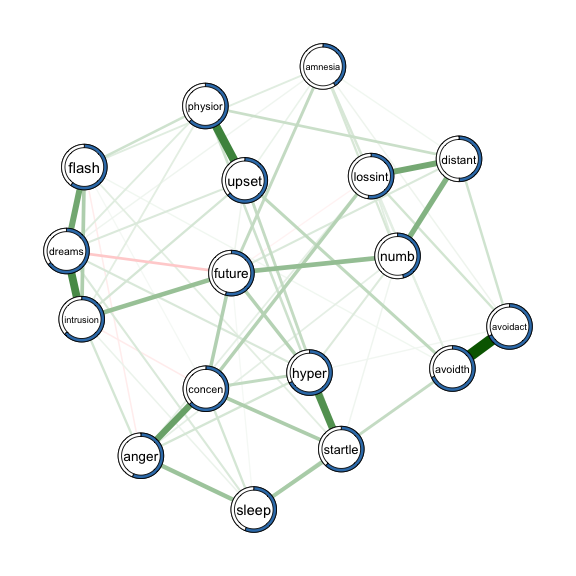