Centering predictors in a regression model with only main effects has no influence on the main effects. In contrast, in a regression model including interaction terms centering predictors does have an influence on the main effects. After getting confused by this, I read this nice paper by Afshartous & Preston (2011) on the topic and played around with the examples in R. I summarize the resulting notes and code snippets in this blogpost.

We give an explanation on two levels:

The simplest possible example to illustrate the issue is a regression model in which variable $Y$ is a linear function of variables $X_1$, $X_2$, and their product $X_1X_2$

We first verify that centering variables indeed does not affect the main effects. To do so, we first fit the linear regression with only main effects with uncentered predictors

and then with mean centered predictors

We include the interaction term and show that centering the predictors now does does affect the main effects. We first fit the regression model without centering

and then with centering

Why does centering influence main effects in the presence of an interaction term?

Rewriting the model equation in the following way

More precisely, in the regression model with only main effects, $\beta_1$ is the main effect of $X_1$ on $Y$ averaged over all values of $X_2$, which is the same as the main effect of $X_1$ on $Y$ for $X_2 = \mu_{X_2}$. This means that if we center predictors, $\beta_1$ models the same effect in the data in a model with/without interaction term. This is an attractive property to have when one is interested in comparing models with/without interaction term.

Why are we doing this? We are doing this to develop a more general understanding of what happens when adding constants to predictors. It also puts the above example in a more general context, since we can consider it as a special case of the following analysis.

Numerical experiment I: Only main effects

We first fit a series of regression models with only main effects. In each of them we add a different constant to the predictors. We do this verify that our claim that centering predictors does not change main effects extends to the more general situation of adding constants to predictors.

We first define a sequence of constant values we add to the predictors and create storage for parameter estimates:

We now fit 25 regression models, and in each of them we add a constant c to both predictors, taken from the sequence c_sequence:

Remark: in Explanation 1 we said that the coefficient of determination $R^2$ does not change when adding constants to the predictors. We invite the reader to verify this by inspecting A$R2. 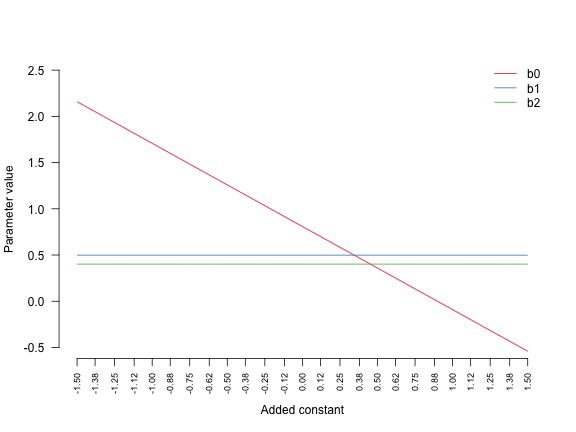 We see that the intercept changes as a function of c. The model at c = 0 corresponds to the very first model we fitted above. And the model at c = -1 corresponds to the model fitted with centered predictors. But the key observation is that the main effects $\beta_1, \beta_2$ do not change. A proof of this and an exact expression for the intercept will fall out of our analysis of the model with interaction term in the last section of this blogpost. 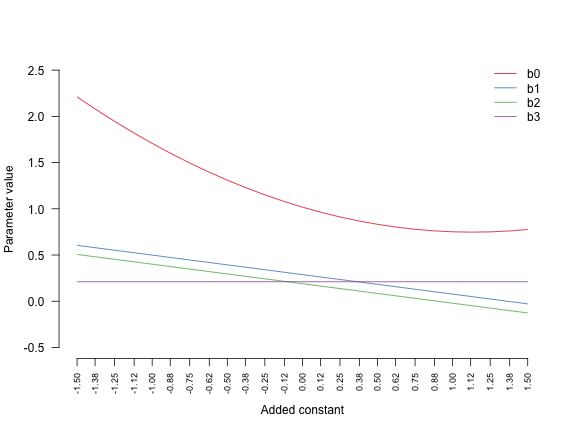 This time both the intercept $\beta_0$ and the main effects $\beta_1, \beta_2$ are a function of c, while the interaction effect $\beta_3$ is constant. At this point the best explanation is simply to go through the algebra, which explains these results exactly. We do this in the next section.

Deriving function for all effects

We plug in the definition of centering in the population regression model we introduced at the very beginning of this blogpost. This gives us every parameter as a function of two things: (1) the parameters in the original model and (b) the added constant. Above we added the same constant to both predictors. Here we consider the general case where the constants can differ.

Our original (unaltered) model is given by:

Now we plug in the predictors with added constants $c_1, c_2$, multiply out, and rearrange:

Now if we equate the respective interecept and slope terms we get:

Let’s check whether those fomulas predict the parameter changes as a function of c in the numerical experiment above. 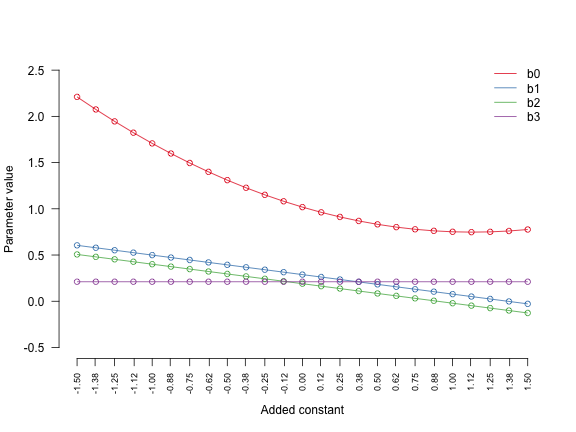 and they match the numerical results exactly.

We see that the derived expressions explain exactly how parameters change as a function of the parameters of the reference model and the added constants.